Halloween is always a bit anti-climactic, primarily because we're off the beaten path and don't get many trick-or-treaters. I believe the doorbell rang four times last year. But I always hope, and I always prepare.

Time to carve the pumpkins: 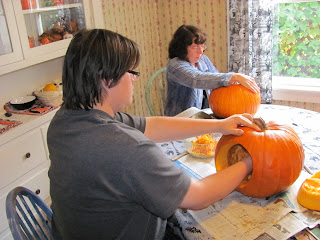 This is my "Ernest" face after discovering an extra-slimy, disgusting, sprouted pumpkin seed: 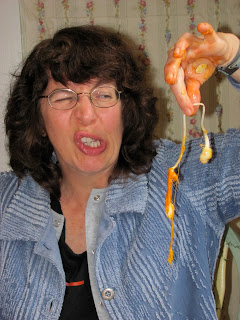 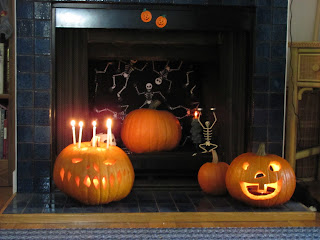 We took them outside later, of course.

Rob and I settled onto the couch with a big bowl of popcorn to watch Trick-r-Treat.

I think word must have gotten around that I was giving out canned coffee drinks to the parents, because we got more trick-or-treaters than we ever had before. We went through five bags of candy. I'd say at least 80% of the girls were princesses. (0% of the boys.) Besides the preponderance of princesses, we were visited by two Winnie the Poohs, a Power Ranger, Superman, Wolfman, a skeleton, and various characters from movies and television shows that I've never heard of. Not a single pirate! That's a surprise; that's practically all we had the past couple of years.

Lots of treats, and no tricks. A successful evening.
Posted by dragonmamma at 10:54 AM 3 comments: