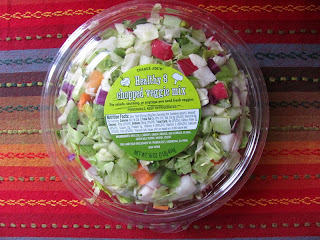 Today's post is brought to you by procrastination. The details are a bit vague and fuzzy since events took place about three months ago. I can also thank Josie for giving me a prod by commenting on an old post.

My husband and I have been mucking around with low-carb diets for the past couple of years, but we never went hard-core low. Some people swear to have amazing energy levels and get super-lean on such a diet, so we decided to give it a whirl for 30 days.

No grains. No nuts. No sugar at all, including any fruit. We mainly ate lots of meat, eggs and veggies, and also coconut oil "fat bombs". This was NOT a low calorie diet. I did not measure things precisely, but I estimate that we were eating between 3,000 and 5,000 calories daily, depending on how many fat bombs we ate.

Results: We both felt great during the first week, and we each dropped a few pounds. My husband continued to feel great for the rest of the month, but I was dragging for the last three weeks. We both dropped a couple more pounds during the second week, and then we stayed the same weight for the rest of the month. When the 30 days were up, I added moderate quantities of fruit and nuts back into our diets. I felt SO much better after eating a banana!

I'm guessing that we would have lost more weight if we had attempted to limit our calories, but that wasn't the main point of the experiment. I really wanted to see how I would feel, plus I wanted to kick some bad habits that had crept into my diet, like eating dessert after breakfast, lunch and dinner.
Posted by dragonmamma at 1:08 PM 1 comment: