The weather has finally caught up with the calendar, and I've been enjoying walking places while stockpiling some vitamin D.

I'm woefully behind on blogging about my routine-breakers. Still doing 'em, but I don't feel like focusing on the writing.

Been reading a book about eating bugs. Purely from curiosity; not something I'm planning to do myself! 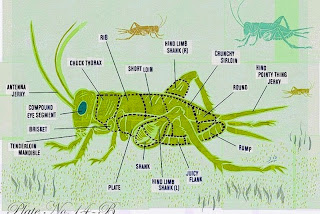 77: I do not shop at Whole Foods Market. I went there during the grand opening last year, and hoo-boy, it's not just a joke that people call it Whole Paycheck Market. But there are some specialty items I couldn't find elsewhere, so I bit the bullet and went. Didn't find everything, but I did get ghee (clarified butter) and coconut-aminos, which is a soy-free alternative to soy sauce.

I did NOT find lard or tallow, which I was looking for so Rob could season a cast-iron pan. I did not expect to be judged by employees working behind the meat counter, but I sensed disapproval for daring to request rendered animal fat. I'm guessing that the meat-handlers are the lepers of the Whole Foods Market community.

78: I rearranged my kitchen to reflect the gradual changes I've made in my cooking/eating habits over the past year. I put away the toaster that hasn't been used for a year, and I now have easy access to my Magic Bullet and Pancake Griddle, which I now use every few days to make a flourless "bread". I also disposed of some items which I don't expect to ever use again, such as flour and any kind of condiment containing corn syrup. 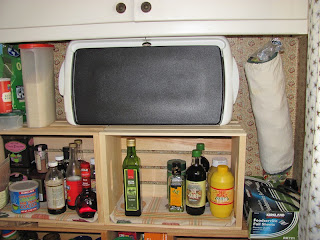 79: The winding of the clock is another one of those chores that's always done by Rob; I did it this time. I needed Rob to show me the routine to make sure I didn't wind the side that activates the hourly bongs. (I like the bongs, but Rob doesn't.) 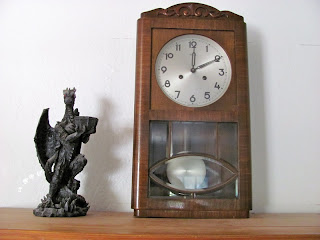 80: Ever since I got hired by the Y and am allowed to enter before opening time, I've been going in early to set up boot-camp for Lorenzo. (Class starts when we open at 5:30am.) This generally involves carrying 20-30 plates (from 25 to 45 pounds each) downstairs from the weight-room to the gym. It's been sort of wearing me out so that I'm tired by the time class begins, so I told him I would no longer be doing this when I'm attending class. (I still set up on Thursdays when I don't attend.)
Posted by dragonmamma at 12:50 PM 3 comments:

73: There's a store down-town that sells ZAP electric motor vehicles; cars, scooters, mini trucks, etc. It's been there a few years but I've never been inside. Today I went in and looked at them. Very cool; if I had an extra few thousand bucks sitting around I would totally buy an electric vehicle with a foot-pedal option. 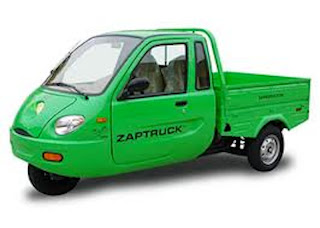 74: I won a gift-certificate from a radio-station before Christmas (for identifying a song played backwards) and I still hadn't used it. When I got home from my morning work-out, Rob and I used it to have breakfast at the Crepevine. I had a really yummy steak, mushroom and caramelized onion sandwich with fries.

75: I haven't used chopsticks for years. I guess it's like bike-riding; once you learn, you never forget. Stir-fry is easy; slaw soup is a bit trickier.

76: I didn't say a word to Rob all day. (I warned him the day before so he wouldn't think I was mad at him.) I think he liked it. I had a really hard time keeping my mouth zipped; there were all sorts of things I was bursting to say.
Posted by dragonmamma at 12:19 PM 3 comments:

69: I walked directly from work to the grocery store to do some shopping. Had to plan ahead and bring my tote bags with me.

70: When I was a bored student in school and college, I doodled all the time, but that was years ago. After 30 some years, my style hasn't really changed. 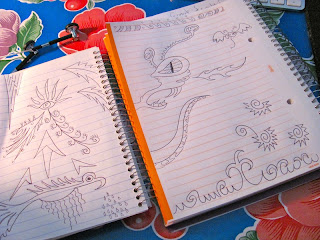 71: My husband is the list-maker in the house, not me. I prefer to carry crucial info around in my head. I forgot to take a picture and I can't find it now, but I made a to-do list of such important tasks as grinding coffee, making flax-seed pancakes, and washing the sheets.

72: I've constantly worn earrings my entire adult life. One time when I was visiting my mom I lost one, so I switched the remaining earring from ear to ear for the rest of the week. So I took my earrings out for more than 24 hours. I kept rubbing at my earlobes all day just because I could.
Posted by dragonmamma at 11:24 AM 3 comments:

Mix together, pour into shallow dish, and microwave approx 1-1/2 minutes. 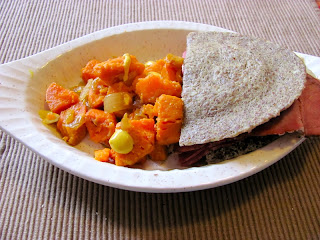 It actually tastes like bread! I cooked this one in the same dish that I'm serving the sandwich and sweet potatoes in.  When in a hurry, I can quadruple the recipe and cook on a pancake griddle, but then it looks like pancakes instead of bread.

66: I consider putting a new bumper-sticker on a car to be a huge commitment. (Ever need to take off a bumper-sticker?) They gave me this one (on the right)at Penzey's Spices, and I knew I was ready to commit. 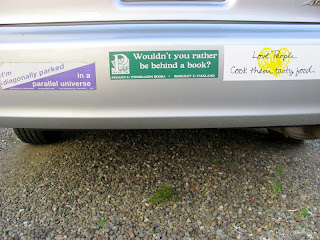 67: Got another Red Cross certificate, this time for CPR and AED (automated external defibrillator.)

68: You know how you hear something on the radio or you have a random thought and you think "I'm going to Google that." but then you totally forget about it next time you get on the computer? No? Happens to me all the time. Today I wrote them all down and Googled them. 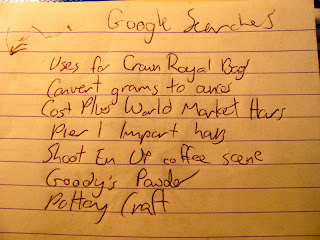 Posted by dragonmamma at 11:45 AM No comments: